Browns LB Takitaki out for season with torn knee ligament 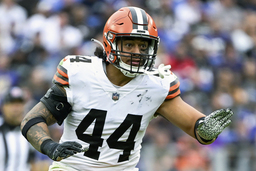 Cleveland's linebacking corps took another major hit as starter Sione Takitaki will miss the remainder of the season after tearing a knee ligament during Sunday's win over the Houston Texans.

Takitaki had started the past five games and played solidly for the Browns (5-7), who previously lost starters Anthony Walker Jr. (quadriceps) and Jacob Phillips (pectoral) to season-ending injuries.

Takitaki, who is in his final season under contact, mainly had played on the strong side and in Cleveland's base defense before moving into the starting middle role after Walker and Phillips went down.

In 12 games, the 2019 third-round draft pick was credited with 71 tackles and one sack and forced a fumble.

"Tak's one of my favorites," Stefanski said. "Plays very, very physically. Loves this game, plays hard, great teammate. He was playing more for us than he had in the past. His role had expanded because he earned it. Was playing out of position, so to speak, and he was doing a really nice job.

"Disappointed for him but excited what it will mean for some other guys stepping up."

With Takitaki's season over, Deion Jones or Jordan Kunaszyk could move into the starting lineup. Also, Tony Fields II likely will get more time after playing the best game of his career against the Texans.

Fields, who has been slowed by injuries since being taken in the fifth round last season, returned an interception for a touchdown and forced a fumble near the goal line that cornerback Denzel Ward scooped up and scored.

In other injury news: Stefanski said wide receiver Anthony Schwartz has entered the league's concussion protocol and rookie receiver David Bell is day to day after injuring his thumb.

Safety Ronnie Harrison Jr. was evaluated and cleared for a concussion.

© 2023 by STATS PERFORM.
Any commercial use or distribution without the express written consent of STATS PERFORM is strictly prohibited.