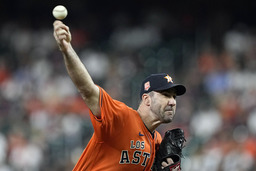 It could be a rewarding series on several levels for the Baltimore Orioles in the coming days.

The Houston Astros will arrive to take on the Orioles in a four-game series, beginning Thursday night in Baltimore.

There's lots at stake for the Orioles in their quest to reach the American League playoffs.

Houston (99-51) might be in cruise control, though there appears to be no let-up. The Astros, who'll reach the 100-win mark with their next victory, have won four in a row and 10 of their last 11 games.

At least the Astros did the Orioles a favor this week by sweeping three games from the Tampa Bay Rays, who are one of the team's Baltimore (77-71) is chasing in pursuit of a spot in the playoffs.

There's also another element that could endear Baltimore fans to the Astros. Popular designated hitter Trey Mancini, who was traded to Houston from the Orioles at the trade deadline, will be back at Camden Yards for the first time in an opposing uniform.

"I hope the fans give him a great ovation," Baltimore manager Brandon Hyde said. "I'm sure they will. It's going to be a lot of hugs from our side to him. Obviously, the fan base here loved him and still continues to love him. His teammates think so highly of him as well."

The Astros will have some standouts in the spotlight.

Astros right-hander Justin Verlander (17-3, 1.78 ERA), starting pitcher for the series opener, has the best earned run average in the major leagues. He has gone 14 consecutive innings without allowing a run. That involves his last three appearances, including three shutout innings against the Orioles on Aug. 28.

Verlander left that game early because of a calf injury. He was out until returning for five hitless innings with nine strikeouts last Friday against the Oakland Athletics.

"I can tell there's a little rust," Verlander said, realizing there was a layoff of about three weeks.

With Houston having clinched a playoff spot as American League West champion, the Astros are bound to be extra cautious with Verlander's workload.

"The fact that he's on the mound is a good sign for us (and) for him," manager Dusty Baker said.

The Orioles are scrambling for offense. Hyde has changed the lineup both in terms of who's in it and the order he places them.

Infielder Rougned Odor has been on the bench for four consecutive games.

"We're giving some other guys some opportunities right now," Hyde said. "You're going to see (Terrin) Vavra play a little bit more, and I'll still find spots for Roogie. But we're just looking at some other players."

Second baseman Jose Altuve was hit by a pitch on the left elbow Wednesday and removed from the game. That makes it unlikely he'd be in Thursday's lineup unless there's no lingering soreness.

Rookie right-hander Kyle Bradish (3-7, 5.05 ERA) will start for Baltimore, trying to recover from a personal two-game losing streak. But it hasn't been all that bad, with the first of those defeats coming when he allowed one run in seven innings to the Boston Red Sox on Aug. 11.

Bradish blanked the Astros on two hits across eight innings in his longest outing of the season Aug. 26 in Houston.