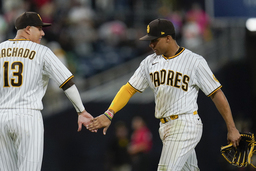 San Diego Padres manager Bob Melvin noted recently that teams in wild-card races have an edge going into the postseason because they are already playing postseason-style baseball.

"Division winners might already have things wrapped up in the final weeks," Melvin said then. "Wild-card teams are usually fighting to the end of the regular season. That means they're already in playoff footing."

At the time, Melvin was hoping his struggling Padres would hit a hot streak that would carry them into the postseason. His wish might have been answered, as San Diego is on a roll.

The Padres hope to complete a three-game sweep of the National League Central-leading St. Louis Cardinals on Thursday in San Diego.

The Padres have outscored the opposition 26-4 in a five-game winning streak. Their starting pitchers have worked 27 straight scoreless innings -- the longest such streak in the major leagues this season. Three of the five wins in the streak have come on shutouts, including two straight against the Cardinals.

Five of San Diego's six runs in the series have scored on two-out hits, perhaps the biggest gain for a team that has struggled with runners in scoring position throughout most of the season.

"I think this is some of the best baseball we've played this season," Melvin said. "We had a stretch earlier in the season when we were playing like this, getting big hits, winning close games ... fast-paced games. Hopefully, it's good timing that we're starting to play again like this.

"When you talk about similarities to stretches during the season where we've played well, it starts with our starting pitching. That's the common denominator."

The Cardinals (87-63) have been shut out in three straight losses -- following a 1-0 win. One run in four games. The three-game scoreless string is St. Louis' longest since the last three games of the 2015 regular season.

Which raises an interesting question. Typically, Albert Pujols -- who is stuck on 698 home runs -- gets the day game after a night game off on the road. But Pujols has three of the Cardinals' seven hits the past two nights and broke up Blake Snell's no-hit bid with a two-out single in the seventh inning on Wednesday.

In addition, Pujols is 3-for-9 with a home run in his career against Musgrove. The slugger is hitless in three career at-bats vs. Padres closer Josh Hader.

Flaherty will make his fourth start since returning from the 60-day injured list after recovering from a shoulder ailment. He went 0-1 with a 4.80 ERA in prior three outings.

He also will make his fourth career start against the Padres, although he hasn't opposed them since 2019. Flaherty is 1-0 with a 1.10 ERA and 16 strikeouts in 16 1/3 career innings vs. San Diego.