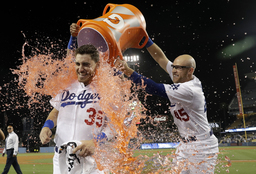 LOS ANGELES (AP) The Dodgers couldn't believe what they were seeing. Neither could Diamondbacks closer Greg Holland.

Trailing 4-3 and down to their last out, Cody Bellinger's bases-loaded walk - the fifth in a row given up by Arizona's bullpen with two outs - forced in the winning run in the ninth and helped Los Angeles edge Arizona 5-4 Tuesday night.

"We put on a clinic there in the ninth. Our guys really just not blinking and waiting for their pitch," Dodgers manager Dave Roberts said. "It's a gut punch to the other side."

Holland (1-1), a former All-Star closer, couldn't find the strike zone after retiring his first two batters. He walked pinch-hitters Chris Taylor, who fell behind 0-2, and Russell Martin and Alex Verdugo to load the bases.

Matt Beaty then walked on four pitches to bring in the tying run and keep the bases loaded as Holland exited.

"I felt pretty good out there and then I just completely lost command of the strike zone altogether," said Holland, who threw 30 pitches, including 20 balls. "We had them beat and I let it slip away."

T.J. McFarland nearly hit Bellinger in the elbow, which would have brought in the winning run, but he jumped out of the way.

"That was impressive on our part to lay off pitches and some pretty good pitches, too," Bellinger said.

McFarland went ahead 1-2 in the count before walking the Dodgers slugger on six pitches, forcing in the winning run.

"I got him where I wanted to and wasn't able to put him away," McFarland said. "I didn't throw strikes when I needed it."

D-backs manager Torey Lovullo defended his decision to keep Holland in as long as he did.

"He is our closer and I felt like it was his opportunity to still get the close and slam the door," he said.

It was the Dodgers' fourth straight walk-off win at home, and they became the first team to record four or more consecutive walk-off victories since the 2004 Oakland Athletics notched five in a row.

"They're relentless in every way," Dodgers starter Ross Stripling said of his teammates. "They can slug, they can put together great at-bats and walk every night."

Yimi Garcia (1-2) pitched the ninth to earn the win.

Stripling said he'd never seen anything like what happened.

"As a pitcher it's hard to watch because you feel for him," he said.

The D-backs blew an early 3-0 lead and staved off scoring threats in the seventh and eighth only to have Holland and McFarland implode in the ninth.

"It stings, it definitely stings," Lovullo said. "We were one out and one strike away from the win."

Bellinger beat the shift in the eighth, stroking a double to left center with five D-backs players stacked on the right side of the field. The All-Star was hitless in his first three at-bats after going 7-for-23 on the Dodgers' just completed seven-game trip.

Max Muncy and Enrique Hernandez struck out swinging to end the inning.

Taylor tripled to deep center in the seventh and nearly lost his balance rounding second before sliding head-first into third. But Garlick struck out swinging and Verdugo grounded out to pitcher Andrew Chafin to end the inning.

Adam Jones grounded into a fielder's choice to third base, scoring Ketel Marte to put Arizona ahead 4-3 in the fifth.

Nick Ahmed staked the D-backs to a 3-0 lead in the second with a two-run homer that hit the top of the wall in center and bounced out. It came on the first pitch from Stripling.

Stripling produced the Dodgers' first run with a two-out RBI single in the second.

Hernandez's slugged a two-run homer that tied it 3-all in the fourth.

Arizona starter Taylor Clarke gave up three runs and five hits in 3 2/3 innings. The right-hander struck out one and walked three.

Stripling allowed four runs and seven hits in 4 2/3 innings. He struck out seven and walked two in his eighth start of the season.

Dodgers: 3B Justin Turner was out of the lineup because of residual soreness from being hit on the left elbow by a pitch from Colorado's Chad Bettis a day earlier. X-rays on his elbow and left wrist (hit by a pitch on March 29) were negative. ... OF A.J. Pollock (elbow surgery) and INF Corey Seager (strained left hamstring) are expected to return after the All-Star break. Pollock will have a minor league rehab assignment first, while nothing has been set for Seager. ... INF David Freese (strained left hamstring) will be back Friday or Saturday.

D-backs: RHP Merrill Kelly (7-8, 4.00 ERA) leads National League rookies in innings pitched (99.0) and is second in both wins and strikeouts (79). He's coming off a loss at the Giants last week, when he allowed three runs and seven hits in five innings.

This story has been corrected to show pinch-hitter Russell Martin, not Kyle Garlick, walked in the ninth.