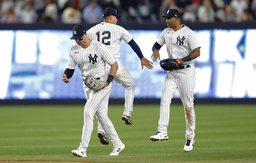 NEW YORK (AP) Last week, JP Sears was pitching before 4,209 fans at Toledo. Now he was getting a standing ovation from a screaming crowd of 38,051 at Yankee Stadium.

"That was awesome. That's something that I really appreciate," the 26-year-old left-hander said Tuesday night after stretching his scoreless streak to 12 2/3 innings and pitching the big league-leading Yankees over the worst-in-majors Oakland Athletics 2-1. "Watching a lot of baseball growing up, it was fun to watch from that side of the TV, so it was fun to be on that side of it tonight."

Wearing No. 92, the highest jersey number in Yankees history for a starting pitcher, Sears (3-0) made his second spot start and limited the A's to three hits in 5 2/3 innings, getting nine groundball outs. Throwing at up to 95.7 mph, Sears mixed fastballs, sliders and changeups among 78 pitches.

Jose Trevino backed him with an RBI single in the first off trade candidate Frankie Montas (3-8), Marwin Gonzalez homered in the second and the Yankees won for the 15th time in 19 games.

Sears then was optioned back to Triple-A Scranton/Wilkes-Barre.

"The thing we really pride ourselves on is making this a seamless transition between the major leagues and minor leagues," pitching coach Matt Blake said. "This room does a good job of accepting guys when they come up here and embrace them and get them to just be themselves and it allows them to go out there and be aggressive in the zone."

An 11th-round draft pick by Seattle in 2017, Sears was obtained after that season in a trade for right-hander Nick Rumbelow. When the 2020 minor league season was canceled because of the pandemic, Sears tried to refine his motion with Daniel Moskos, then the pitching coach at the Yankees' Class A affiliate in Charleston, South Carolina, and former teammates James Reeves and Asher Wojciechowski.

"I just worked on my mechanics a lot, shortening my arm action, just trying to clean up my movement on the mound," Sears said.

He made it to Triple-A last season and has a 1.83 ERA this year at Scranton/Wilkes-Barre.

Sears earned a spot on the Yankees' expanded opening day roster and made two one-inning appearances before he was sent down on April 18. He got his first major league start against Baltimore on May 25 after a rainout caused New York to reset its rotation. Before him, the highest number for a Yankees starting pitcher was Alfredo Aceves' No. 91.

New York brought Sears back to give Luis Severino, Gerrit Cole, Jameson Taillon, Nestor Cortes and Jordan Montgomery extra rest. The Yankees had been the only team in the majors not to have a sixth pitcher make multiple starts this season.

Sears joined Clarke Schmidt and Ron Marinaccio as rookie pitchers contributing to the Yankees' 55-20 record, the best 75-game start since the 2001 Seattle Mariners.

"There's kind of an expectation that they have within themselves that you can't manufacture," manager Aaron Boone said. "JP's a really nice kid, an understated smart kid, but he's tough. He's got an edge to him and he expects to do that when he goes out there."

Clay Holmes pitched the ninth to finish a six-hitter for his 13th save in 14 chances. After two catcher's interference calls against Sean Murphy on Monday, Murphy reached on an interference call on Trevino with two outs in the ninth on a grounder to second that caused the public-address system to play the game-ending "New York, New York."

Pinch-hitter Stephen Vogt and Elvis Andrus singled, driving in a run, and Tony Kemp grounded out to strand two runners.

Sears had soaked in the scene hours earlier.

"I let myself take that in the first couple minutes I step on the field to warm up and just enjoy that part of it," he said. "After that, it's the plate, the catcher and the umpire and the hitter out there."

Boone was ejected in the eighth for arguing with plate umpire Stu Scheurwater in what the manager said was the accumulation of called strikes on 6-foot-7 Aaron Judge he thought were below the zone. "Hopefully, everyone's paying attention," Boone said.

Sheldon Neuse was picked off by Trevino in the third and Christian Bethancourt was throwing out by Trevino trying to steal second base in the fourth.

Stephen Piscotty was 0 for 3 as Oakland's designated hitter in his return from a strained left calf that had sidelined him since May 6.

LHP Manny Banuelos was designated for assignment by the Yankees to open a spot for Sears.

Athletics: OF Jonah Bride was put on the 10-day IL, retroactive to Monday, a day after hurting his right shoulder and cutting his nose during a collision with Chad Pinder. Manager Mark Kotsay said Bride had an MRI on Tuesday.

Yankees: 2B Gleyber Torres said his right wrist, which he hurt on a hard swing, was feeling better after a cortisone injection Monday. Torres hopes to play Wednesday, though Thursday might be more realistic. He said his sprained right ankle was good enough to play on. ... LHP Aroldis Chapman struck out two in a 1-2-3 inning for Scranton/Wilkes-Barre during his third rehab appearance and likely will be activated Thursday. On the IL because of left Achilles tendinitis, Chapman last pitched for the Yankees on May 22. ... RHP Domingo German, sidelined since spring training with right shoulder impingement, allowed two hits in 3 1/3 scoreless innings with three strikeouts and no walks for Double-A Somerset in his second rehab start.