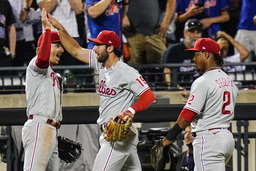 "Regardless of what anybody says, we're going to come out and play our game and try to make every play and do things the right way," Phillies third baseman Alec Bohm said.

Hernandez was not working the telecast because the game was streamed on Apple TV. He is not scheduled to work the next two games because he is attending the 40th reunion of the 1982 World Champion Cardinals in St. Louis.

"We've been playing like this for a while and we played really well tonight," Philadelphia interim manager Rob Thomson said.

In the sixth inning, Phillies Bohm made a barehanded, off-balance throw from third base to get Marte at first and pitcher Ranger Suarez snared a comebacker by Francisco Lindor.

In the 10th, Bohm hit a sacrifice fly for the go-ahead run.

The Mets had a six-game winning streak stopped and also lost infielders Jeff McNeil and Eduardo Escobar to early injuries. McNeil exited after grounding out in the second with a right thumb laceration and Escobar departed with left side tightness.

"Got to make a decision about how long and it's tough right now, this quickly, after the injury to be able to tell how long it might or might not be," Mets manager Buck Showalter said.

The NL East rivals played for the first time in two months and Philadelphia improved to 41-20 under interim manager Thomson. Joe Girardi was still managing the Phillies earlier this season when they dropped nine of 12 meetings to New York to fall to 21-27.

The Mets lead the division. The Phillies, second in the wild-card race, are 9 1/2 games behind New York with Atlanta in between them.

In the ninth, Vierling caught a shallow flyball by pinch-hitter Daniel Vogelbach and threw out Marte at the plate for the first outfield assist of his career.

"If he lifted the ball, I had an idea it probably would be in my direction," Vierling said.

Through an interpreter, Marte said "rhe anticipation was to go home on a play like that - the situation of the game, the way it was, it's a flyball."

"It really just came down to a player making a perfect throw there at that point," he said.

Vierling made his ninth career start in left field, seven of them this season.

"I've been playing with Vierling since I got drafted," Bohm said. "So, I know he can throw and I saw him coming in on it and I didn't think they were going to send him. I thought he might be bluffing but game like that, runs are tough to come by."

Mets star Max Scherzer and Suarez each gave up one run in seven innings.

Scherzer allowed three of his nine hits in the opening inning when the Phillies scored their first run on Bohm's RBI single. Opponents entered Friday hitting 3 for 49 off Scherzer in opening innings this season.

Scherzer allowed his second-most hits this season but avoided big trouble throughout his outing. He escaped a bases-loaded jam in the second by retiring Bohm, stranded two in the fourth and was aided by a nifty double play started by Lindor in the second.

Scherzer struck out six, upping his career total to 3,146 to move one behind former Detroit teammate Justin Verlander for 14th all-time.

Suarez allowed three hits in seven. He struck out four and walked two.

Seranthony Dominguez (6-3) benefited from Vierling's strong throw in the ninth to earn the win. David Robertson tossed a perfect 10th for his 16th save and second with Philadelphia.

Mark Canha hit a sacrifice fly in the Mets second.

Phillies rookie Bryson Stott started the game with a double and reached four times. According to the Elias Sports Bureau, he became the first player to reach four times in a game against Scherzer.

"It's pretty cool," Stott said. "I didn't know until they all started screaming and when I got in the locker room. He's obviously going to be in the Hall of Fame so it's pretty cool."

Former Mets pitcher Noah Syndergaard returned to Queens for the first time since leaving via free agency and was given a brief tribute video consisting of highlights mostly from 2015.

Syndergaard signed a one-year, $21 million contract with the Angels in November and joined the Phillies at the deadline.

The right-hander was 47-31 with a 3.32 ERA in 121 appearances for the Mets. He underwent Tommy John surgery in 2020 and pitched two innings late last season

"That energy that can make New York so great and positive can also bite you in the butt a little bit, especially with what I'm going through now," Syndergaard said. "I felt like if I was doing that playing here, everything would be highlighted,"

Syndergaard is not scheduled to pitch this weekend but likely will face his former team next week in Philadelphia.

PHILLIES: DH/OF Kyle Schwarber (strained right calf) took swings in the cage and is day-to-day. Schwarber was pulled in the fifth inning of Thursday's 3-0 loss to Miami and Thomson said he thinks the slugger will avoid an IL stint.