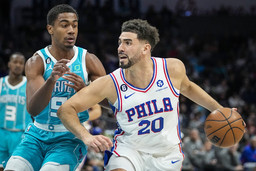 CHARLOTTE, N.C. (AP) Terry Rozier scored nine of his 22 points in the final 5 minutes as the Charlotte Hornets rallied past the Philadelphia 76ers 107-101 on Wednesday night in a matchup of injury-riddled teams.

Charlotte, which trailed by 13 points in the first half, won for only the second time in 13 games and ended a three-game skid.

Hornets coach Steve Clifford said Rozier has been carrying a huge burden because of injuries to starting guard LaMelo Ball and others.

"He's just not getting a lot of easy shots because of the situation right now," Clifford said. "He's playing huge minutes and he's got a lot of responsibility. But he took over there in the fourth quarter."

Milton had 22 points, Melton 20, Harris 19 and Harrell 16 for Philadelphia. Harrell was playing in Charlotte for the first time since that franchise allowed him to leave via free agency last summer.

The Sixers were coming off a home win Tuesday night over Brooklyn.

"I thought we played great," Philadelphia coach Doc Rivers said. "Honestly, I think we ran out of gas. I didn't see a negative thing we can say in this game.

"Honest to God, I thought we played hard. I mean in the first quarter we had 33 points. From then on, we missed a lot of makeable shots, which you'll live with."

Rozier's 3-pointer late in the first half pulled Charlotte within 54-53 at the break.

After Charlotte took as much as a five-point lead in the third quarter, the Hornets used Rozier's late burst to pull away.

"I just want to give my best effort and whatever coach needs me to do."

Hornets: The team held a moment of silence prior to Wednesday's tip-off in remembrance of meteorologist Jason Myers and pilot Chip Tayag of WBTV, who were killed in a helicopter crash off Interstate 77 in Charlotte on Tuesday.