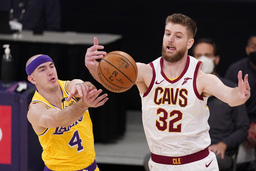 CLEVELAND (AP) The Cleveland Cavaliers exercised the fourth-year contract option on forward Dean Wade, who made 28 starts last season and became a solid contributor during the team's resurgence.

The Cavs announced the move with Wade on Wednesday.

Wade averaged 5.3 points, 2.9 rebounds and 19.2 minutes in 51 games last season before suffering a knee injury and undergoing surgery. He missed the final 15 games.

The 6-foot-9 Wade had been valuable as a fill-in starter and the Cavs missed him down the stretch. Cleveland dropped eight of its last 11 games in the regular season and then lost both play-in games.

However, the Cavs had a 22-win improvement from the previous season and are expected to contend next season with Wade in their rotation. He gives the Cavs depth along with size and another outside shooter. Wade made 43% (21 of 49) of his 3-pointers in his last 12 starts.

The former Kansas State standout has appeared in 126 games over three seasons with Cleveland, which signed him to a two-way contract in 2019.