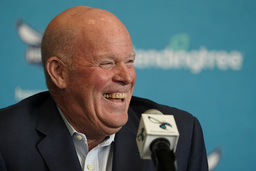 CHARLOTTE, N.C. (AP) Steve Clifford is back in familiar surroundings as head coach of the Charlotte Hornets - except he is in need of a new apartment.

Clifford was introduced as the Hornets head coach on Tuesday, a little more than four years after general manager Mitch Kupchak fired him from that same position.

Golden State assistant Kenny Atkinson had accepted the job, but later backed out after the Warriors won the NBA title citing personal reasons. Clifford wasn't even among the first round of candidates to initially interview for the job; Kupchak quipped that was because he had taken over the lease on Clifford's downtown Charlotte apartment just days after firing him in 2018.

"I was afraid he might ask me for his apartment back," Kupchak joked.

The GM kept the apartment, but did give Clifford his old job back.

After he was let go, Clifford said he maintained a great relationship with Kupchak and owner Michael Jordan. The coach added while he didn't agree with the team's decision, he did understand it after the Hornets finished with back-to-back losing seasons during his tenure.

He went on to coach the Orlando Magic for three seasons, reaching the playoffs twice, and feels like he's better now than he was when he left.

"You want to evolve and get better at what you do," Clifford said. "I have coached a lot more games than I had when I was here the first time and worked with another team. You learn a lot from that."

Clifford inherits a Hornets team that was 43-39 last season and one he believes is more talented than any he's had in his eight seasons as an NBA coach, including the 2015-16 team that finished 48-34 before losing in seven games to the Miami Heat in the first round of the playoffs.

"One of the things that you look for is the potential for growth as you watch film and I think this is a group that can get better and better," Clifford said. "I look at this team as well put together, they fit well together and they can play a style that fits into what wins in this league right now."

To Clifford, that means an up-tempo pace with players who share the ball.

While Clifford's strength has been coaching defense - the Hornets finished in the top 12 in defense in his previous five seasons - he and this team could be a good fit.

Led by All-Star point guard LaMelo Ball, the Hornets want to push the ball up the court and play fast.

Clifford plans to let Ball and company continue to do just that.

"We are going to play offensively with a very similar emphasis that they have played with the last couple of years," Clifford said. "Offense starts with playing through the strengths of your best players and Ball is a great talent with a passion for the game and a flair for playing in the open court and we want to take advantage of that."

But Clifford also knows he was brought in to improve the Hornets' defense - which finished 22nd in the league last year.

"We knew defensively we needed to ramp it up a little bit," Kupchak said. "... But we talked (during the interview process) about playing the way our fans like to see us play - with great pace. That is fun and exciting. We see the game the same way and we saw the way this team should move forward in the same way."

The biggest decision facing the Hornets this offseason will be the ability to re-sign restricted free agent Miles Bridges, who has improved his productivity each year and led the team in scoring last season.

NOTES: The Hornets exercised the option on forward Jalen McDaniels' contract, meaning the former second round pick will earn $1.9 million this season.