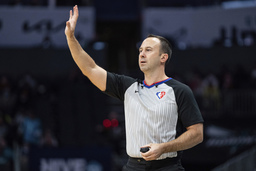 The NBA Replay Center has a new leader.

Kane Fitzgerald, who spent 13 years working as an NBA referee, has been announced as the league's new vice president of referee operations and replay center principal. He's replacing another former referee in Jason Phillips, who left the job after three years.

The 41-year-old Fitzgerald officially started his new job Sunday at the opening of the league's annual preseason referee meetings.

"I've always kind of been excited about new challenges, and it's a rare opportunity that you can come off the floor as a referee and find a position in the NBA of this magnitude," Fitzgerald said. "I'm excited about the challenge, something new, something different, seeing if I can grow into the role and being as successful as I was on the floor."

Fitzgerald worked his way up the ranks steadily throughout his on-court career. At 18, he was officiating high school games in his native New Jersey, introduced to the job by his father - who has been a referee for 49 years and is still working games.

From there, Fitzgerald did stints at the college level - the Big South, Atlantic Sun and Ohio Valley conferences - before two years in the WNBA and four more in the G League. He was picked to work four NBA Finals games, the last of those coming this past season in the Boston-Golden State series.

At that time, he had no idea this opportunity would present itself.

"Kane's broad experience and distinguished record as an NBA official make him well suited to oversee our efforts to maintain the highest of standards for the NBA Replay Center," said Byron Spruell, the NBA's President for League Operations. "We are fortunate that he will bring his skills and expertise to such an important leadership position."

In his new role, Fitzgerald will oversee the day-to-day operations of the NBA Replay Center in Secaucus, New Jersey. He also will be involved with referee operations in ways such as creating training videos and interpreting the rules of the game for officials, teams, broadcasters and media.

The move allows Fitzgerald to have a more normal schedule with his family. The work will remain demanding and travel will still be involved - his home is in Florida now, the job is in New Jersey - but not officiating 50 or more games a year will bring a better work-life balance.

"I've probably had Christmas on Christmas Day maybe five out of the last 17 years," Fitzgerald said. "And last year was the first year I was ever home for Thanksgiving. So, there will be some very positive changes for the family with this schedule."