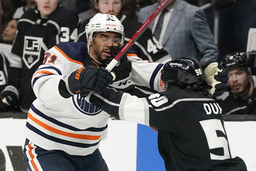 The Edmonton Oilers have both momentum and home-ice advantage going their way when they play host to the Los Angeles Kings on Saturday in Game 7 of their Western Conference first-round series.

The favored Oilers, who are looking to win a series for the first time since 2017, will not underestimate the mental aspect of the challenge ahead against a team that has managed to claw its way through the matchup.

Edmonton coach Jay Woodcroft wants his charges to see the possibilities instead of the pressure.

"It's a great opportunity for us," Woodcroft said. "We've had some really good moments in the series, but for us to get to where we want, we have to ... get our mind right for what the challenge is going to require.

"We have a very clear understanding of who we are. We understand how we have to play to be successful."

The Oilers forced the deciding game with Thursday's 4-2 road victory, in which Evander Kane scored twice to give him seven goals in the series. Connor McDavid collected one goal and two assists to give him a league-best 12 points in the playoffs, and Tyson Barrie scored the game-winning goal with five minutes remaining.

"I can't wait," Barrie said. "(Our fans have) been amazing all year, all playoffs and we've seen the crowds and what they're getting up to, so it's going to be bonkers in there. We can't wait to get on the ice for Game 7. It's going to be awesome."

Edmonton defenseman Darnell Nurse will return to the lineup after he served his one-game suspension for head-butting Phillip Danault in Game 5.

However, Oilers star forward Leon Draisaitl missed Saturday morning's skate with an ankle injury and will be a game-time decision, according to the Los Angeles Times. Woodcroft declined to comment on Draisaitl's status.

The Kings, who finished five points behind the Oilers in the regular season for third place in the Pacific Division, wasted an opportunity to clinch the series on home ice Thursday. They fell behind early, then erased a 2-0 deficit only to allow a late goal.

Now the quest for Los Angeles is to learn from what transpired.

"The older guys haven't been there in a few years, and we have a few guys that haven't experienced this at all, so it's natural," Kings captain Anze Kopitar said. "But if you told us that we got to win one game to advance, we'd certainly take the opportunity. So, it's not all that bad."

Kopitar is one of only a few players remaining from the Kings' Stanley Cup winning teams of 2012 and '14, and the lesson he wants his teammates to learn is to focus on their first shift and nothing else.

"I think maybe the thought of ending the series kind of creeped into our mind and we started off a little tentative," he said.

Kings coach Todd McLellan recognized his team was the underdog to start the series, but that narrative is out the window now.

"We've had a dress rehearsal," McLellan said. "We have enough experience, guys that have been through this before.

"We like this situation. If somebody said 'Hey, the L.A. Kings against the Edmonton Oilers, go play for one game,' we're not particularly happy with how we got to it (with Thursday's loss), but we can't do anything about that now, so let's look ahead. We've won there before and we can win there again."

The Kings hoped 20-goal scorer Viktor Arvidsson would suit up at some point in the series, but he's been ruled out due to injury.