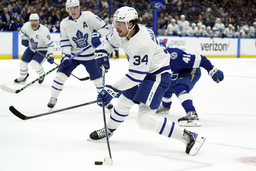 The Lightning kept alive their hopes of a third straight Stanley Cup on Thursday when Brayden Point scored at 18:04 of overtime to give them a 4-3 victory in Game 6 at Tampa.

"Game 7s, as they say, flip a coin," Lightning captain Steven Stamkos said. "You never know what's going to happen. So (Point) gave us a chance with that big goal. It's about wins this time of the year, and this group has proved that we don't care how it gets done. We just want to get it done."

The Maple Leafs, on the other hand, are trying to get past the first playoff round for the first time since 2004. They have failed in six attempts since.

"We can't change anything now," said Auston Matthews, who scored Toronto's first goal on Thursday. "It's about this next game and going out there with the purpose and details and competing for 60 minutes or whatever it takes."

The Lightning scored the first two goals Thursday as they did in losing Game 5 on Tuesday. Toronto took the lead Thursday when John Tavares scored twice within 26 seconds in the final minute of the second period.

Toronto questioned the call on Kampf when video showed that defenseman Cal Foote took the stick to his shoulder and not to his face.

"In that moment, it's tough to take," Maple Leafs coach Sheldon Keefe said. "But I have the benefit of slow-motion replay, officials don't, so they're in a tough position. Certainly, it's a tough one to take, but that's the way the game goes."

The Maple Leafs had opportunities to win, particularly in overtime when they had a 9-6 advantage in shots on goal and created the better scoring chances.

"Loved how we played in overtime," Keefe said. "We attacked, we had chances, plenty of opportunities to finish it and really gave them nothing until they had the look. They made good on their one look. That's the difference."

Lightning coach Jon Cooper noted that Tampa Bay capitalized on its special-teams opportunities, which he considered a theme of the series.

"We (scored) a four-on-four goal, power-play goal, short-handed goal," Cooper said. "It's just been the tale of the series for both teams. We just won that war tonight."

Now one winner-take-all game will decide whether the Maple Leafs will get the proverbial monkey off their backs or if the Lightning will extend their postseason mastery.

"They're two-time Stanley Cup champions," Maple Leafs defenseman Morgan Rielly said. "They know how to handle these situations. And we're trying to break through."