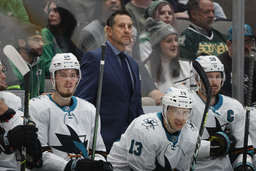 San Jose Sharks coach Bob Boughner and his staff were fired two months after the regular season ended, a move the team said it made to clear the decks for the next general manager to pick new leadership behind the bench.

Interim general manager Joe Will informed Boughner, assistants John MacLean and John Madden and video coach Dan Darrow on Thursday night they were being let go. The team announced the changes Friday, with Will linking the decision to the lengthy GM search getting down to a handful of potential candidates.

"We just came to the conclusion that, amongst everything else, we just want this fresh start moving forward with a general manger and a head coach," Will said during a video news conference. "That will also create the opportunity for the general manager to find their head coach and partner up with them moving forward."

The organization is still in the middle of a lengthy search for a GM after Doug Wilson stepped down after nearly two decades on the job. Will said the team conducted 12 interviews to narrow the pool for in-person talks to roughly three to five finalists.

Former Sharks players Mike Grier and Ray Whitney and longtime NHL forward-turned-Montreal Canadiens assistant GM Scott Mellanby have all been linked to the opening, with the process expected to last beyond the draft next week and potentially the start of free agency July 13.

"We are in the home stretch with the candidates," Will said, adding the organization as currently constructed is prepared for the offseason. "I don't have a date on it, but we're getting much much closer."

Without mentioning names, Will said there was "some commonality" among visions for the franchise's future among the finalists. That clearly included not wanting to be tied to Boughner and his staff.

Will said the next GM would "select a head coach that matches the vison that they have."

Boughner, 51, coached the Sharks for the past 2 1/2 seasons after replacing Peter DeBoer in December 2019. They missed out on the playoffs each of the last three years following a run of 14 playoff appearances in 15 seasons, including a trip to the 2016 Stanley Cup Final.

Boughner had one year remaining on his contract at $1.5 million. Given the late timing of the Sharks decision, he won't be able to land another NHL head-coaching job for the start of next season since every team with a vacancy has settled on a replacement.

Will said given the front office's wholesale evaluation of the team, "This really couldn't have gone any quicker."

"Often these decisions are made immediately after the season," he said. "We weren't prepared for that. ... They were in consideration all up to that point until they weren't."

Boughner played almost 700 NHL regular-season and playoff games as a rough-and-tumble defenseman before moving into coaching. This was his second stint behind the bench with San Jose after spending two years as an assistant on DeBoer's staff from 2015-17 before taking over as coach of the Florida Panthers.

Will is not worried about the next GM losing a game of coaching musical chairs. That could largely be because the rebuilding Sharks are targeting different kinds of candidates than contenders around the league were looking for.

"I think there's plenty of good candidates out there," Will said. "There's going to be numerous good options for us in the head-coaching and coaching staff areas."