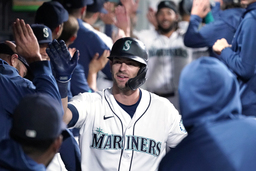 The visiting Oakland Athletics turn to their feel-good story, right-hander Chris Bassitt, when they attempt to end a 10-game, head-to-head losing streak to the Seattle Mariners as their three-game series continues Tuesday night.

The Mariners have used their dominance of the A's, including four straight wins at Oakland last week, to assume a better position in the American League wild-card race.

A's manager Bob Melvin asserted after the Monday defeat that Seattle's 13-4 record against Oakland this season isn't weighing on his team mentally.

"Yeah, they've had their way with us, but when we take the field (Tuesday), we'll expect to win," he said. "It doesn't feel real good to be beat that many times by one team, but this is the big leagues, and you have to go out there and earn it the next day."

Bassitt (12-4, 3.16 ERA) tossed three scoreless innings Thursday in a contest Seattle rallied to win 6-5. The early hook was by design. He was returning to the mound after a 36-day layoff that resulted from getting his cheekbone shattered by a line drive off the bat of the Chicago White Sox's Brian Goodwin.

The right-hander threw 48 pitches Thursday, allowing just one hit and one walk while striking out four. He left with a 3-0 lead but did not get a decision.

Bassitt hasn't recorded any decisions in three starts against the Mariners this season, allowing eight runs in 12 innings. He is 1-4 with a 4.05 ERA in 13 games (11 starts) against Seattle in his career.

The Mariners announced postgame Monday night that they are changing their pitching plans for Tuesday. Left-hander Yusei Kikuchi, who was in line to start, won't get the ball. Instead, lefty Tyler Anderson will serve as the opener in a bullpen game.

"Where we're at in the season," Seattle manager Scott Servais said, "we're going to try to do everything we can to give ourselves the best chance to get off to a good start in these games."

Anderson didn't earn the Tuesday outing based on evidence from his most recent start. He lasted just two-plus innings Saturday against the Los Angeles Angels in Anaheim, Calif., giving up nine runs on nine hits and a walk. He struck out none for the first time in 29 starts this year including his time with the Pittsburgh Pirates before he joined the Mariners at the trade deadline.

A possibility for work on the mound Tuesday after Anderson is right-hander Matt Brash. He was in attendance at the Monday night game, but the Mariners didn't immediately add him to the active roster. Still, his major league debut could come at some point this week.

Brash, a 23-year-old Canadian, went 6-4 with a 2.31 ERA in the minors this season, splitting time between high Class-A and Double-A.