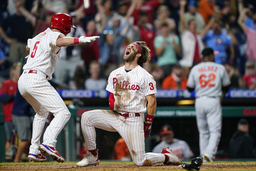 The Philadelphia Phillies will have their best shot to catch the Atlanta Braves in the National League East when the teams begin a three-game series on Tuesday in Atlanta.

The Braves (83-72) hold a 2 1/2-game lead over Philadelphia (81-75) and have a magic number of five, which means any combination of five Braves wins and Phillies losses would give Atlanta the title. Atlanta is trying to win its fourth consecutive division championship.

"As a team, as a whole, I think we're confident going into Atlanta," Philadelphia right fielder Bryce Harper said. "We have to go down there, we have to do our job, we have to be ready to go from pitch one, get 27 outs a game, and we have to be very good with all 27 of those outs."

The Braves would clinch the division with a sweep. Philadelphia leads the season series 9-7 and swept the Braves in the season-opening three-game set.

"It's kind of one of the coolest situations to be in, an opportunity to clinch at home in front of all our hometown fans," Atlanta catcher Travis d'Arnaud said. "But we just have to take it game by game and go out there and win the series."

The right-handed Wheeler, who grew up in Atlanta, is one of the leading candidates for the Cy Young Award. He leads the league in innings pitched (206 1/3) and strikeouts (240), both career highs, as well as complete games (three) and shutouts (two).

He has won four in a row but did not receive a decision in his most recent start against Baltimore on Sept. 22, when he allowed one run in six innings. In his last four starts, Wheeler has allowed three total runs in 23 2/3 innings.

Right-hander Morton was added to the Atlanta staff this season for moments like this. The veteran is accustomed to playoff pressure -- he's won five of his last six playoff starts -- and has pitched in the World Series with Houston and Tampa Bay.

The veteran has been solid all season and has a 2.95 ERA over his last 18 starts. In his last outing on Sept. 23 against Arizona, he worked six innings and allowed three runs in a game the Braves lost.

He has started four times against Philadelphia in 2021 and allowed three or fewer runs in three of those. His last appearance against the Phillies came on July 22, when he gave up two runs in six innings of an Atlanta win. He gave up a season-high six runs -- all unearned -- against Philadelphia on May 7.

Philadelphia is expected to get right-handed reliever Connor Brogdon back from the 10-day injured list (strained right groin). He would add depth to a bullpen that took a blow when Archie Bradley was sidelined on Saturday with a season-ending oblique injury.